LACROIX
+
About us
+
Solutions
+
Applications
+
IT security
+
News & Events 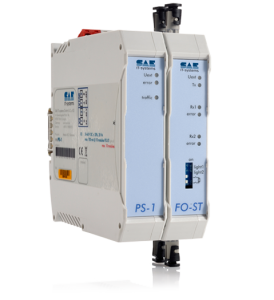 Star couplers are network components that distribute an incoming light signal as a star shape over multiple fibres. As a central component in FO networks, star couplers act like a hub to form a link between a sender and receiver. In contrast to a switch, star couplers distribute the signal line of a connected sender uniformly to all connected receivers.

To satisfy the highest quality standards, we have developed our mcFO media converter.

The mcFO represents a modular media converter that bundles multiple FO signals on one RS-485 bus. This results in a star coupler, which links numerous nodes via fibre optics. The mcFO comprises up to ten FO modules each with two FO ports as well as the power supply module mcPS-1. This module has an integrated RS-485 connection for linking the transmission protocol. It supplies the connected FO modules with power via bus plug-in connectors. In physically terms, it is possible to couple up to 30 further star coupler groups at the RS-485 interface – this allowing numerous nodes to be integrated.

The media converter from SAE IT-systems represents a freely usable hardware solution for converting from RS-485 to fibre optics. No special software needed to use the mcFO as a star coupler. Plus any bit rate is accepted. A reliable glass breakage detection with automatic resetting of bus blockage allows interference-free operation of the remaining lines.

Typical application areas of the media converter include

Provision of all serial protocols, including:

The mcFO- star coupler is available in various product variants