>Electricity>Tailor-made for “one fits all”: the FWG-50

Particularly in densely populated regions such as Hamburg, where possible grid failures usually affect a large number of households and companies, the grid managers must have a precise overview of the situation in the grid and monitor a large number of stations. The responsibility of the distribution grid operator Stromnetz Hamburg GmbH covers more than 7,000 stations.

Although the telecontrol equipment of a certain proportion of these stations (e.g. stations with high importance for grid stability or stations at strategically important or hard-to-reach locations) causes high initial efforts and costs, it represents the most economical solution in the long term: due to the possibility of switching and controlling from the central grid control centre in the event of grid interruptions resulting from short circuits and ground faults, the grid downtime and losses in the secure supply, can be significantly reduced, thus avoiding negative effects on the achievable grid fees.

Standardisation as the key to success

In order to make sure that the telecontrol technology for large distribution system operators like Stromnetz Hamburg not only optimises the supply reliability, but also the implementation of the technology remains economical, SAE has developed a very special product: the telecontrol station net-line FWG-50. A key factor in economic integration of large quantities is the sensible standardisation of the systems. Since compact stations of various makes and designs are used in parallel in the grid area of Stomnetz Hamburg, the definition of a uniform standard based on standard components (e.g. FW-5 or FW-50) was not possible due to the sometimes very limited space in the stations.
The net-line FWG-50 was designed in 2009 according to the requirements of the predecessor company of Stromnetz Hamburg, Vattenfall GmbH, specifically for the automation of 10 kV systems in Hamburg and Berlin. A special feature of this system is its accommodation in a metal housing as a rack drawer and the process connection via a side-mounted Harting connector. Its 8.8 cm height and 60 cm depth has been adapted to the tight space conditions in compact stations and allows the accommodation of the device within the plants. In addition to the telecontrol unit, the housing also has space for a communication component such as a TETRA radio modem, DSL modem, VFT dedicated line modem or another type of interface. The devices can be prepared, parametrised and tested by Stromnetz Hamburg in the central laboratory. Depending on the technical requirements of the destination station, such as transmission route (different modems, V24, Ethernet), number of circuit breakers, etc., the product is equipped and parametrised. The finished telecontrol stations are then delivered to the respective destination stations and installed on site with a few simple steps. In the Hamburg compact stations, the devices can be placed in a slot above the circuit breakers. In the walk-in stations, they are attached to the wall.

Success goes into the next round

After several years of successful project development, the requirements profile was supplemented and redefined with regard to a few technical specifications. Thus, for example, local short-circuit and earth fault direction indicators or network analysis systems are integrated via an RS-485 interface in the front of the devices via Modbus. As part of the new tender, SAE has also completed the switch to a new CPU generation, which offers additional power reserves and various new features in the area of IT security. 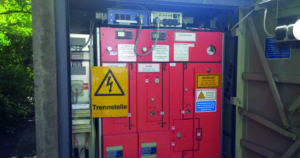 Once again, the decision was made in favour of our in-house solution. We are pleased about the renewed success and the order to deliver the second generation of the FWG-50 to a satisfied customer.

Stromnetz Hamburg does not only benefit technically and operationally from the use of the FWG-50: through clever standardisation and optimised processes, the integration effort was significantly reduced, yielding additional economic benefits. There are already more than 1,000 FWG-50s in use in the Hanseatic city.
The FWG-50 is also highly recommended for other grid managers who need to equip and supervise many stations.